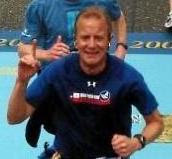 The Boston Marathon is the best since...
I rank Boston as the best U.S. marathon (followed by Chicago then Houston) since entrants are required to demonstrate a prior marathon time sufficiently fast to qualify them by their extremely strict requirements. This selectivity - excluding 90% of all marathoners - results in Boston runners being honored by the running community generally, and by race spectators in particular.

The famous "Heartbreak Hill" is merely one of several tough hills found on the Boston course - all inconveniently situated between miles 17 and 21! The course is beautiful, starting in rural Hopkinton, and concluding in downtown Boston - passing extraordinary sights and hundreds of thousands of cheering spectators. It is extremely well organized, and the area truly open their hearts to the runners.

Specific to this run:
I had an absolutely fantastic first Boston marathon experience! After being dropped off by my friend in Hopkinton I was fortunate through his wife to be provided a "VIP" pass which allowed me access to the Hopkinton middle school and most importantly their indoor restrooms - a huge treat versus the alternative of long queues for the outdoor Port-A-Potties!

Other than the head-wind the weather turned out to be very good, as the temperature was in the low to mid 40's and the skies were clear. The only problem was the strong and consistent head-wind of 10 to 15 miles per hour.

While my personal results were a bit disappointing, with less wind and better hill training I'm sure I'll have a better outcome next year. My overall time was 3:50:30 (8:47 pace), worse than I'd hoped via my recent P.R. at 3:32:17 (8:06 pace). Encouragingly, my half marathon time was 1:46:30 (8:07 pace), and my strength was very good. Nevertheless, I'd squandered energy averting and fighting the wind, and with on-set of the hills in Newton my second half deteriorated severely to 2:04:00 (9:28 pace). However, considering my prior Achilles tendonitis that prevented my training adequately on hills, and especially after adjusting for the head-winds* I'm generally satisfied.

Amongst the high points of the Boston Marathon experience were:

I didn't mention this during my Saturday long-run video, but in tapering for the Boston Marathon on 4/20 I'm following the advice of Bernd Heinrich from his great book "Why We Run". Bernd writes that in the week preceeding one's marathon run you should - as much as possible - run at your marathon pace. By doing so you'll feel very comfortable running at that speed.

I recognize that this statement may be seen as completely contrary to my stated position on Saturday's video that "whatever time I run Boston I'll be happy with"... but that was Saturday! Subsequent to that video I completed that 16-mile long-run, the following day I had a great 10-miler on the same hilly trails at better than my goal Boston marathon pace, and today I had an excellent tempo run.

What's most encouraging is my newfound recognition that I'm 99% recovered from my former Achilles injury. I credit my usage of the elliptical over the last two months - a great non-impact cardio exercise which maintains cardiovascular fitness while the Achilles is allowed to recover at its own pace. I believe that stretching exercises have also helped, as has the use of the Strassburg Sock.

As a result I'm now in the midst of setting much more ambitious Boston Marathon goals. Specifically, my new goals are:
Bottom line, though, is while my cardiovascular conditioning is excellent, that doesn't necessarily speak to the adequacy of my endurance over 26.2 miles, and my ability to survive the hills beginning at Newton Lower Falls - especially since I've only recently emerged from my Achilles-induced funk I've omitted 90% of the key pre-Boston hill work. Consequently, while I've set my Boston goals ambitiously, I'm going to play it by ear, see how it goes, and will adjust accordingly! Wish me luck!
Posted by Mark U. No comments:

Today was an absolutely incredible day! After saying goodbye to my wonderful wife, I headed off to Memorial Park to run the 4 the Park 4-Mile Fun Run. This inaugural running event supports the Memorial Park Conservancy, and had an amazing 1,000 runners.

After meeting-up with friends Paul, Mary Beth and their daughter we ran a relaxing 3-mile warm-up, following which we lined-up for the 4-mile race. It was with some anxiety that I awaited the gun, since I will be running my first Boston Marathon in only two-weeks, and continue to struggle with my Achilles tendinitis. While my warm-up had not revealed any significant pain to the sore right Achilles, I was nevertheless cognizant that by starting-off too hard, and especially by toeing-off too vigorously I risked a potentially disastrous tear to the Achilles, which would destroy any chance of completing Boston.

Nevertheless, with the thought you only live once and the announced count-down I felt growing confidence that I would put in my best effort. With Paul initially running adjacent to me I shot past the start line, and after a few minutes was amazed that I had just knocked down a very comfortable and in-control first mile at 6:53. Since my prior personal record pace was 7:03 I knew I was running faster than I had thought possible! Nevertheless, I did not slow since I felt strong and my right Achilles - though tight - was not hurting. So I kept-up the strong initial pace, concentrating on alternating my breathing technique between relaxed deep breaths and allowing my natural respiratory pace to take over.


Despite having started 6-seconds after the gun, with perhaps 30 or 40 runners in front, I was surprised to continually pass other runners during the second mile. After a brief time I was astounded to see the second mile mark ahead, and noted my second mile pace was 6:52! This was insane! I was running faster than any other race in my life - at age 50!

Doing a quick status check I realized that I had made a mistake by not having removed my T-shirt prior to the race. Though the starting temperature was cool at 65F, I should have known that by running at top speed I risked overheating. Not wanting to slow down to remove my shirt I instead tossed a volunteer's provided cup of water over my head, then concentrated on my right Achilles - while it wasn't in pain, it was getting distinctly tighter.

Beginning in the third mile I shifted into pure racing mode, using the mental technique that I learned from Olympian Jeff Galloway, whose book Marathon was my initial running Bible in training for my first marathon in 2004. First, I visualized throwing a steel cabled lasso over a runner ahead of me, cinching the cable to prevent my target from gaining any further distance, then reeling them in until I caught them. I repeated this technique for several runners, then saw a grey-haired man quite likely in my age bracket (age 50-54), in front by about 20 yards.

While not even dreaming of placing, much less winning my age bracket (I had been disappointed in all my prior races upon realizing that I was worse than tenth behind my age bracket winner), I nevertheless knew with confidence that I MUST reel in that man. Using the same lasso technique I realized to my frustration that this target would not be as easy to catch as the others had been. Seemingly whenever I stepped up the pace my quarry sped up simultaneously - as though he had eyes on the back of his head! While I was not falling behind, neither was I gaining ground.

Fearing that I may not be able to catch him, I noticed a slight hill ahead, and was encouraged to see my opponent slow! Shifting into passing gear I applied another racing technique described by Dr. George Sheehan in his great book Running and Being. As I passed my target I listened carefully to his breathing. While mine was labored and fast, his was more rapid and strained, so I relaxed realizing that if I maintained a consistent effort he was not a threat.

I passed the third mile marker realizing that I had run my penultimate mile in 6:54. Despite not purposefully doing so I was seemingly locked within a very narrow 2-seconds variation in pace - with only one mile left! Truly buckling down I remained in racing mode the final mile via continuing the lasso and reel-in techniques with additional runners, including two fast young men who were both likely in their mid-twenties. To my frustration, however, with one-quarter mile remaining both got their revenge by simultaneously passing me to my left and right! Try as I might to re-catch them, I was simply unable, and while I was unhappy to see these competitors irretrievably pass I was mollified that at least they were not in my age bracket.

With the finish-line now less than 100 yards ahead, to shouts of kick it in I did - and shut-off my Garmin Forerunner with a 4-mile time of 27:34, representing an average pace of 6:53 - improving by 10-seconds per mile my prior personal record! I was completely ecstatic that I had done well while not further hurting my Achilles! I then happily waited a brief time to cheer Paul, Mary Beth and other running friends from the Houston Fit "Green" training group. After a final cool-down 3-miler I was astonished to learn from Mary Beth that I had won my age-group competition with my closest competitor being a full one-minute behind!

Afterwards, with the benefit of retrospect I learned several things from this race:
Related links:
Posted by Mark U. 1 comment: