I've always been a huge fan of "RunnerDude's" blog found at http://ncrunnerdude.blogspot.com, owing to it's consistent high quality focus on all matters pertaining to both runners and individuals simply looking to improve their overall fitness. It deserves every runner's bookmark.

Today's post, however, is especially exceptional, as it  features an incredible interview with Chuck "Marathon Junkie" Engle. As you'll see, his moniker goes well beyond being merely apt!

Have a very happy, safe and productive New Year!
Posted by Mark U. 3 comments: 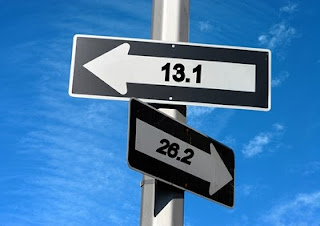 “Nothing endures but change.” –Heraclitus
Posted by Mark U. 8 comments:

I'm looking forward to tomorrow's 22-mile training run with Kenyan Way, as how well I do will determine whether I stay in the Houston full or drop to the half. The weather bodes to be quite good, especially so considering the nasty conditions elsewhere in the country!

TAG - Jamoosh from Last Mile Lounge was tagged by five questions, and in turn he passed-on the tag to others:

1. What are you most proud of accomplishing in 2010?  I was proudest to have learned from my many training errors in preparing for the 2009 Boston Marathon, and as a result to set a P.R. in the 2010 Boston.

2. What are your running goals for 2011?  After five marathons per year for three years running I need a change in pace, literally and figuratively! After running Houston full or half marathon I'm planning to spend six-months working on speed and my running form. After doing so I hope to set a 5K and 10K P.R.

4. What is your favorite holiday guilty pleasure?  Starbucks Eggnog Latte - I feel guilty for every one of its delicious 610 Calories and 27 grams of fat.

5. What was your most embarrassing running moment?  A few years ago, shortly after starting a long run with a group of friends, I was caught-up in my conversation and was completely oblivious to my surroundings - which I proved by running headlong directly into a wide wooden four foot tall pole that the other runners easily avoided. I bounced backward sprawled horizontally on the ground looking up as my friends concernedly asked if I was okay. With much embarrassment I picked myself up and resumed my run, reassuring everyone that I was fine -  thereby proving the power of endorphins over pain and pride receptors ;-)
Posted by Mark U. 4 comments:

Houston Full or Half Marathon?

Should I run Houston's full or the half marathon? It's a head-scratcher, partly tied to the 2012 Boston Marathon.

While I'm currently signed-up for the Houston Marathon on January 30th I could easily run the same day half marathon instead, provided I switch by the December 19th deadline.

Subsequent to my recent San Antonio Marathon disappointment I've been strongly thinking about switching to Houston's Half Marathon, as based on my recent Chicago and San Antonio marathon splits I would have easily set personal half-marathon records, so I clearly have the fitness to excel at that shorter distance. Additionally, my coach Sean Wade and I feel that I would tremendously benefit by a six-month rest from my three year recent history of running five marathons per year, and to instead concentrate on speed versus endurance by focusing exclusively on 5K and 10K races.

However, I want to be able to line-up in Hopkinton in 2012. As the Boston Marathon will certainly sell-out immediately upon registration opening (anticipated in October, 2011) presuming I begin my six-month marathon hiatus subsequent to my next race it would be ideal for me to get another Boston qualifying marathon run under my belt at Houston.

Of course, as the 2011 Boston race sold out in only eight hours the BAA may change its 2012 registration date, significantly tighten its qualifications standards, enlarge the number of runners (at minimum by stopping the congestion-inducing and freeloading bandits), and/or move towards a a lottery system. However, as all of these possibilities are outside my ability to predict or influence it makes sense for me to simply re-qualify under the current rules then hope for the best.

Consequently, here's my plan. Until Saturday, December 11th I will continue training while generally following the Kenyan Way full marathon plan. I will then run my scheduled Kenyan Way 22-miler (16-miles @8:00 pace with the final 6-miles @7:30 marathon pace). If I flag on that key training run I'll switch to the half instead with a clear conscience that I've done the right thing. Though as a result I may be unable to run my third Boston Marathon in 2012 I'd be completely OK with that outcome, and would be happy to start my forthcoming speed-focused training with a half-marathon personal record. Time will tell! Thoughts?
Posted by Mark U. 4 comments: