Earlier today I had the distinct pleasure of running the 2010 Houston Marathon.  This was my fifth Houston and seventeenth overall marathon or beyond event, and was undoubtedly the best.
The weather was good, with clear skies and temperatures ranging from an ideal 43°F at the start, to a bit hot upper 50s peak.  A Houston record of more than 20,000 runners participated, with the full and half marathon events selling out in less than 3-days!

This huge crowd gathered before the race with great enthusiasm and excitement, and celebrated afterwards at the George R. Brown Convention Center - a well appointed facility that ranks as the best such marathon hosting facility (perhaps explaining Houston's consistent draw of top global athletes).
As a key part of my race strategy I ran with the 3:20 pacing group, and absolutely credit that group for helping me achieve this goal - with a personal record time of 3:19:38!  As a consequence of running with the 3:20's my split times were extremely consistent, and I achieved a rare 38-second negative second half split!
ADDITIONAL CREDIT TO:
LESSONS LEARNED:

HYDRATION: Weighing in immediately before and after the race revealed to my huge surprise that I had lost four and one-half pounds - more than one pound beyond the maximum recommended (typically cited at two percent of body weight). I had been very thirsty and a bit light-headed in the final four miles, and in retrospect should have slowed down and drunk more through the final aid stations! Lesson learned: Trust your thirst - an excellent gauge to assuring appropriate yet not excessive hydration! Don't worry about slowing down a bit to drink sufficiently so-as to fully quench your thirst - particularly in the final miles of an event under warmer conditions.  Whatever time you might lose will be fully compensated by a safer - and a faster performance. NOTE: On the opposite side of the fluid hydration spectrum lies hyponatremia. Recognizing its potentially extreme dangers a runner should certainly not drink beyond one's thirst (evidenced by gaining weight during a run), and weighing in before and after a variety of runs builds understanding of appropriate fluid intake.  If interested in more on-topic I made a contribution to the excellent Extra Mile Podcast (http://theextramilepodcast.blogspot.com/), and my ~10-minute contribution largely on hydration lessons learned can be found on Episode 61, beginning 12-minutes into the recording.

CLOTHING: With clear, bright, humid and sunny conditions in the final miles, and the temperature rising to the upper 50's, I was sweating profusely so at aid stations poured water over my head while taking 4-Oz. of Gatorade.  While doing so brought immediate relief I should have first removed my sleeveless running shirt and run bare-chested to maximize heat losses. 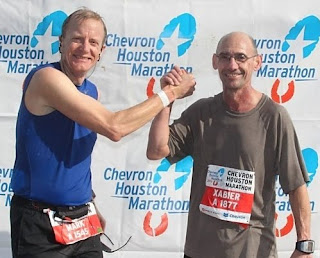 With speedster Xabier narrowly edging me by 18-seconds we both celebrate a personal record marathon time of 3:19!
Posted by Mark U. No comments:

Great tips from Kenyan Way describing five excellent ways to beat anxiety on race day (this was sent in the final days preceeding the Houston Marathon):

Get Focused on Your Body
Good athletes know their bodies well. It is important to be present and aware of how you are breathing, what your muscles are doing, etc. Take some deep breaths. Count up to four or five as you inhale and out to five or six as you exhale. This will help you relax and stay in your body. While your competitors will be stressing out and wasting energy, you will be able to stay positive and perform well.

Trust Your Training
There is an old farm saying that goes, “The hay is in the barn.” What this refers to is that there is a time when a farmer cuts his hay, bales it up, drives it into the barnyard, and stacks it in the barn. When this is done it is a huge sigh of relief. You know the animals will be fed for the winter. The same applies to your race day. Your “hay” is in the barn. You have done all the training up to this point and have earned the right to celebrate your skills on this important day. Don’t try to sneak in any more training or try something different at the last minute. Trust that your body and mind are ready to compete and enjoy the race.

Don’t Let Yourself Get Distracted
While others may be distracted by weather or the conditions of a track or course, you should stay focused and do what you came to do. Distractions take energy away from you. Conserve that energy for the race. Stay on task by visualizing yourself running strong and fast.

Use Your Recall Button
Great athletes do not predict their next move or action based on their last failure. They stop, do a little positive self talk, replay a great race in their head, and perform in the way they know they are capable. Hanging on to a less than stellar event will affect your performance. Recalling a past successful race will help you perform at your peak.

Prepare Yourself for “Glitches”
We are good at visualizing great race strategies and seeing ourselves move up through the pack. What we also need to do is to prepare ourselves for those times when our bodies throw us a “glitch”. This might include a potty break, muscle spasm, a side ache, a fall or a slow start. Visualize this and then see yourself recover from it immediately. Having this image will help reset you on the path to success without losing ground or wasting energy.
Posted by Mark U. No comments:

Earlier this week I had the misfortune of United Airlines losing my checked bag and with it my Garmin Forerunner 405.  With the Houston Marathon rapidly approaching I was facing with dread the prospect of running it without a trusty Forerunner to keep me on-pace and to automatically record my splits.

Looking on the bright side of my loss, I've always been frustrated with the Forerunner 405's limited battery life of 4-hours, and as I have plans to do several triathlons at the Houston Marathon Expo I looked at other Garmin Forerunners.  I was delighted to find their fantastic Forerunner 310XT

, which retains the wireless connectivity options of the Forerunner 405, adds triathlon capability, water resistance, a 20-hour battery life(!) and a much larger screen (that is far easier for those reading glasses challenged athletes like myself.)

Here's a good Garmin video that describes the 310XT:


I'll give the unit a good testing during the marathon tomorrow!
Posted by Mark U. No comments:

I just read the wonderful book The Perfect Mile by Neal Bascomb, and highly recommend it.  As a long-time runner fascinated by the sport I was captivated by the dramatic competition between Roger Bannister, John Landy and Wes Santee.

While most readers will know the outcome of this tale before reading it, Bascomb is able to create and maintain a fair amount of suspense by allowing the reader to experience events leading up to the 1954 Empire Games showdown from these three individuals very different perspectives.

Roger Bannister impressed me most fundamentally, as the thinking man's runner, with a classic middle distance long stride and finishing kick, as well as insights into the scientific principles that underlie cardiovascular exertion. Amazingly, during the time period of Bannister's accomplishment he his time spent training was severely limited owing to his demanding medical studies that severely limited his training time.

John Landy, the workhorse of the trio, logged more miles and brought his single-minded focus to the task. But, lacking the closing speed and power of the classic milers, he was forced run the legs out of his competitors from the front.

Meanwhile, Wes Santee, the least famous and accomplished of the three, might have been the most talented. However, the demands of his University of Kansas track schedule, military commitments, and confrontations with track and field's governing body were impediments that proved too difficult to overcome.

The best part of this book was the fact that these three men pursued this historic goal with none of the spoils of today's professional athletes, so each of them was motivated by the simple ideal of achieving the impossible.
Posted by Mark U. No comments: