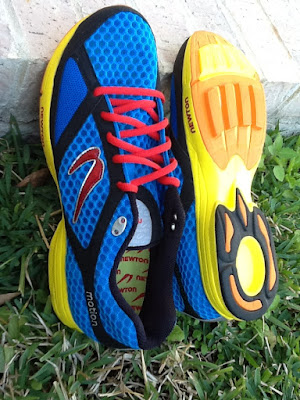 Having run in Newton Motion Stability Trainers for three years, I love them.  Prior to these becoming my marathon training and race "go to" shoe, I had run in Brooks Adrenalines, widely described "traditional stability shoes."  Upon switching to the Newton Motions I immediately found their far lighter weight, significantly lower heel-to-toe drop (4 mm vs. 12 mm), and their proprietary Action/Reaction mid-sole technology all contributed to dramatically improve both my race performances and my natural running form.

So, having had success in this shoe (and even having my form professionally analyzed while wearing them) it was with trepidation when I saw that for the spring of 2012 Newton had updated their Motion Performance Trainers.  My first impression upon opening the box and looking at the shoes was... Wow!  Not one to normally post photos on DailyMile, I decided to in this case, and was blown away by the favorable comments.  As with the Newton MV2's, these are not for the timid!

I next tried them on for fit and comfort.  I had always been delighted with the prior Motions' ample toe box, which provided a roomy feel that I found critical when I increased my distance beyond ~18 miles.  Fortunately, the 2012 Motion retains this feature, and are even more comfortable owing to their new contoured sock liner.  Also, new in this release are wide-mesh uppers to facilitate more rapid sweat evaporation and cooling.  Training with a prodigious sweat rate from hot and humid Houston, this ranks in my opinion as the new Motion's greatest enhancement.

I then gave them a good ten mile distance run.  Long enough to provide a bit of the challenge that the Motions are designed for, yet short enough to allow me to concentrate fully on them.  Via running a deliberately mixed surface route, I was able to easily contrast the feel and performance of the shoe on both Memorial Park's soft dirt and gravel trails and on Houston's typical ultra-hard concrete roads.  In both cases the shoe handled and felt great, even more-so once I crossed into double digit mileage territory.

Since I had run in the ultra-lightweight MV2's just the prior day, I was sensitive to differences between these two great Newton shoes.  To be fair I shouldn't even allude to such a comparison, since they are two shoes of completely different intended purposes and race distances.  The 2012 Motions, while 5% lighter than their predecessor, retain the substance and long-lasting performance needed especially when crossing over 20 miles.  This, from my long experience is the distance beyond which most marathon runners begin to see their form deteriorate, and where the mild mid-foot mild stability elements of the Motions are the most beneficial.

As the bottom line of this review, the new 2012 Newton Motions will remain my "go-to" marathon training and racing shoe!
Posted by Mark U.