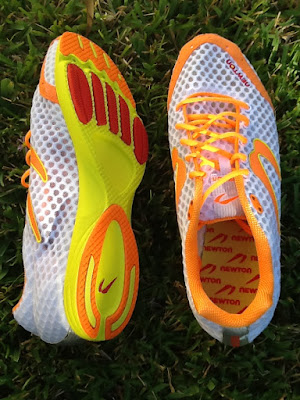 Two and a half months ago I received my Newton MV2 running shoes.  These screamers are engineered to be the lightest and most efficient Natural Running shoe using Newton's second-generation Action/Reaction Technology.  This technology has numerous patents to prevent other manufacturers from simply copying their designs, and having run in Newton shoes for three years I encourage you go to a good specialty running store to learn about them, then to give them a good run.

These MV2's have a truly flat profile, which encourages a quick high cadence gait. Recognizing that many runners, like myself, are transitioning to the MV2's from running shoes with a slightly higher heel-to-toe drop, Newton supplies these shoes with optional three millimeter heel inserts.  Initially feeling my calves to be a bit too tight, I applied the inserts, which relieved the tightness without adding anything to their light weight.  Combined with Newton's action-reaction technology found on the soles of the shoe near where the metatarsals strike, from my experience this results in a performance boost of 15 to 30 seconds per mile.

These MV2's are truly neutral, and, as they are extremely light weight do not provide excess cushioning that inhibits the runner's grounded feel to the running surface - that is essential at higher speeds.  As a pleasant surprise, the MV2's five versus Newton's normal four Action-Reaction lugs provides hugely enhanced responsiveness and cornering abilities, which I found to be especially helpful on a weaving Memorial Park trail.

Curious at what distance the MV2's light weight and minimal cushioning would drive me to a more substantial shoe, I wore them over varying distances while training for the Houston Marathon - up to one 20-miler.  While I've since heard that several area runners have successfully run, and P.R.'d marathons in the MV2's, I found 16 miles to be their maximum comfortable distance.  I believe this distance to solely be a personal one, as with my current level of fitness it corresponds roughly to the point beyond which my running form tends to deteriorate on Houston's hard concrete road surfaces.  So, for the remainder of my Houston Marathon training runs of 16 miles or beyond and for the race itself, I ran in the Newton Gravity Performance Trainer (an easy decision, as in prior years recent I'd successfully run numerous P.R.s and B.Q.'s in the Stability Motions.)

Now that the Houston Marathon is complete, I am training for the Rodeo Run 10K and the Texas Independence Relay.  So, after two weeks of self-enforced rest I just laced-up my MV2's, and took them for what turned out to be a great run.  By concentrating on the pivotal elements of good running form, and cranking up the speed well beyond my normal pre-marathon training pace, these shoes demonstrated again that they rock!

As the MV2's run a bit small I recommend that you get them a half to full size larger than your normal running shoe length.  Also, as I found the MV2's to be a bit snug on the width, by lacing them a bit loosely I found this relieved the tightness without affecting my grip of the road.  Since the best specialty running stores have knowledgeable sales people with a generous return policy, choose the shoe that fits best while you are running, and not simply on the cushioned surface found in many stores. Don't gauge comfort simply by walking around the store in running shoes, as a surprising number of runners do, since the Newton's Action-Reaction technology feels a bit unnatural until you run!

Regardless of the shoe you buy, it's important to transition gradually to a shoe with a smaller heel-to-toe drop.  This provides your body time to both adjust and strengthen, and to minimize the likelihood of inadvertently returning when fatigued to an inefficient and potentially injurious heel-strike.  I have consistently found that by concentrating on gradually increasing my cadence, and concentrating on a slight forward lean from my ankles, that my good running form - and boost in speed with no incremental effort - quickly follows.

Embedded below are four YouTube videos in which Newton's CTO Danny Abshire discusses the MV2's: technology, initial fit (buy a half-size larger), adaptation from other running shoes, and some helpful form drills: