I just stumbled on the following interesting and encouraging research result, which is obviously great news for us runners! Click through to Sweat Science's post: Metabolism rises for 14 hours after hard exercise
Posted by Mark U. No comments:

Who but his amazing likeness, with large boxing gloves, shorts and a shirt identifying himself in bold large letters as "ROCKY", lined-up at the start of this morning's 10K Rodeo Run? Most of the spectators were simply waiting around for the Rodeo Parade which immediately followed the race, so Rocky's presence got their attention - especially as he aped to the crowds with uppercuts and jabs. I appreciated Rocky's antics from my vantage point a few strides behind since the spectators were far louder in applauding for those in his wake.
Nearing the two mile mark, and foolishly thinking that Rocky was weakening I attempted to pass, but with a glare and a quickstep previously reserved only for Apollo Creed in the tenth round he responded. I managed to hold onto my trailing position a few strides behind until just past the half-way point, at which point, thinking of Coach Burgess Meridith, it was me that threw in the white towel.
One of the causes for my suddenly lowered morale results from an unfortunate aspect of the Rodeo Run and all other races originating from Houston's downtown. The event organizers' unfortunately route runners to the north neighborhoods from downtown via the horrible Elysian Viaduct, a completely unpopulated 1.5 mile long four lane concrete road with two elevated bridges over the decidedly non-scenic Interstate 10, a sprawling commercial district and railroad yards. It was at this point in the race, facing the uphill sections and realizing my inability to cool down (the race temperature was 72F with a very humid 65F dew point) I knew that I'd be unable to sustain the 6:47 average pace which I'd managed in the first half. Though "Rocky" and his fans inspired me in the first 5K, I paid for it in the second half by slowing to a comparatively lethargic 7:31 average second half pace.
Repetition of my long-time pacing problem in hot and humid conditions of excessively ambitiously running the first half followed by a second half melt-down didn't squelch my good feelings after the finish. I immediately met-up with a couple of good friends and after we complained about the weather we partook of some much appreciated post-race nutrition. Sadly, I couldn't find "Rocky", as I'd have shaken his hand and thanked him. In any case, I've got next weekend's Texas Independence Relay to look forward to!
Posted by Mark U. 3 comments:

I was one of the co-hosts last night on an interesting and fun Runners Round Table discussion with three true running guru's: Pete Larson, Steve Magness (recently hired by Alberto Salazar) and Newton Running's Ian Adamson. In the podcast I mentioned my positive experience attending Newton's Natural Running Clinic, and with the "Evolution Running" DVD. For further information or to download the episode visit the Runners Round Table blog post or iTunes.

Finally, on the subject of running form and injury prevention here are five good videos, three from Newton Running and two from Chi Running:

Alberto Salazar: “You can be efficient for a while with bad form but eventually that’s not good for your body. It’s going to produce tightness and muscular imbalances and structural problems. Then you get injuries, and if you’re not careful – if you don’t take care of the muscular and structural issues – the injuries can put you into a downward spiral.”

At the Houston Marathon Expo Memorial Hermann's Sports Medicine Institute's Sports Biomechanist Kim Gandler told the audience some generic truths. Amongst these are that:
To one of my follow-up questions Kim clarified interestingly that many triathletes avoid these characteristic weaknesses owing to their activating their hips and glutes while cycling. Recognizing my prior one-dimensional running-centric focus it's little wonder that I've developed muscular imbalances that translate into my less efficient stride.

Accordingly, hoping to improve my efficiency - and ultimately my endurance and speed - I've embraced the strengthening exercises that Kim prescribed following my recent gait analysis. These do an excellent job by targeting my greatest areas of weakness, including:
Having incorporated these exercises and a few others into my training plan over the past two weeks proved relatively easy, and I'm already feeling the benefits. I encourage other runners to similarly have their running form analyzed by someone with extreme competence in this area, and to then incorporate some good running-focused general strengthening exercises (e.g. see this good Running Times article with helpful videos.)
Posted by Mark U. 4 comments:

A few weeks ago I'd attended Newton Running's excellent Natural Running Clinic where Ian Adamson pointed out several flaws in my running form and provided me a couple of technique-related tips.  Eager to find another running form expert able to spend individual time with me I listened with interest to an excellent presentation at last weekend's Houston Marathon Expo, as Memorial Hermann's Sports Medicine Institute's Sports Biomechanist (and M.S. in Bioengineering) Kim Gandler provided an excellent presentation regarding her basic biomechanical and gait analysis.  I was impressed seeing how she uses the Institute's cutting-edge high-speed video recording equipment and computer analysis equipment, along with her deep understanding of appropriate running form and anatomy to successfully help numerous runners and athletes.

So, earlier this week I showed-up eager for my scheduled gait analysis, and I was not at all disappointed.  After briefly warming-up on the treadmill Kim videotaped me from three different angles while running in both pair of shoes that I routinely wear (i.e. the Newton stability performance trainers for my races and 12+ mile training runs, or the light-weight neutral Saucony Kinvaras which also have a low heel-to-toe drop.)

I was extremely impressed with her ability to quickly analyze and to clearly show me my gait mechanics, indentifying several areas of muscular weakness which translates into my longstanding running form issues.  These include my: 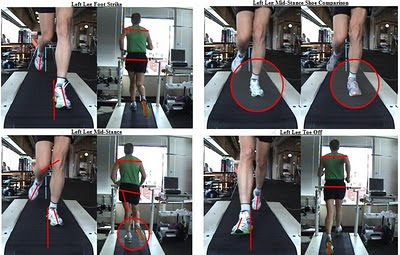 On the positive side I have:
After patiently answering my questions Kim demonstrated several targeted strengthening exercises which I've already begun. She subsequently followed-up with a detailed report with her written conclusions and recommendations, strengthening exercises (with helpful demonstration photos and explanation) and the DVD disc of my treadmill footage (which I will use in the future as a baseline of comparison.)

For any Houston-area runners who suspect that they may have running gait issues, are curious to identify weaknesses which may be affecting their gait, or who have had a history of running-related injuries, I highly recommend Kim Gandler's gait analysis. If you were lucky to have met her at the Expo then you may have received a special offer of $35 off their regularly priced $75 analysis, but even if not it's still a bargain!
Posted by Mark U. 9 comments: