Scientific evidence supports the notion that humans evolved to be runners. In a 2007 paper in the journal Sports Medicine, Dr. Daniel Lieberman, a Harvard evolutionary biologist, and Dr. Dennis Bramble, a biologist at the University of Utah, wrote that several characteristics unique to humans suggested endurance running played an important role in our evolution.

Most mammals can sprint faster than humans — having four legs gives them the advantage. But when it comes to long distances, humans can outrun almost any animal. Because we cool by sweating rather than panting, we can stay cool at speeds and distances that would overheat other animals. On a hot day, the two scientists wrote, a human could even outrun a horse in a 26.2-mile marathon.

Why would evolution favor the distance runner? The prevailing theory is that endurance running allowed primitive humans to incorporate meat into their diet.  They may have watched the sky for scavenging birds and then run long distances to reach a fresh kill and steal the meat from whatever animal was there first.

Other research suggests that before the development of slingshots or bows, early hunters engaged in persistence hunting, chasing an animal for hours until it overheated, making it easy to kill at close range. A 2006 report in the journal Current Anthropology documents persistence hunting among modern hunter-gatherers, including the Bushmen in Africa.  “Ancient humans exploited the fact that humans are good runners in the heat,” Dr. Bramble said. “We have such a great cooling system” — many sweat glands, little body hair.

The following exceptional BBC video by David Attenborough beautifully depicts the Kalahari Bushmen from Namibia and Botswana engaging in a persistence hunt.  This video well depicts the human hunter's ability to engage in an all-day hunt, with all of our evolutionarily-favored attributes being clearly shown, i.e. our: superior cooling, ability to reason (necessary to read the tracks of the prey to discern and deduce its movements) and the type of social and communication skills necessary in the lengthy stalking period leading-up to the chase and in carrying the animal back to the village.

Earlier today I had the pleasure of running the 114th Boston Marathon. It was a great experience!

Having run Boston last year, and being disappointed by my inadequate preparation I incorporated significantly more hills and mileage into the preceding four months of training. My improved strength was clearly evident on Newton's hills, as I avoided last year's walk on the steepest section of Hearbreak Hill.  Additionally, in climbing hills I followed the advice by an experienced Boston-area coach who spoke at the Expo on Sunday.  He recommended that while climbing you should relax your abs, swing vigorously your arms, shorten your stride, and gaze a maximum of 15-feet ahead (i.e. however tempting, don't look-up to the top of the hill - since seeing the full height of the challenge can cause even a strongest runner to begin walking!)

The weather was a bit of a disappointment, though it was far better than it could have been! The temperature was between 52 to 56°F, with relatively clear skies and initially cross winds from the north, which unfortunately became more of a headwind as the race progressed.

I was very happy with the results as I amazingly managed to exactly tie my prior 3:19:37 personal record that I'd recently just set February in Austin! Having never tied a P.R., it was on the one hand frustrating (since even the slightest added effort along the 26.2 mile course would have given me an improvement to my personal record), but, on the other hand I was content since had I run even one second slower I would have been upset.  So, all in all I'm thankful for having done as well as I had, despite Boston's tough course, and particularly in overcoming my nagging right Achilles problem.

On reflection some things worked well while others did not. In the many areas that went well I credit my:
Conversely, I had two distinct improvement opportunities:
As was the case last year, the Boston Marathon spectators were hugely appreciated owing to their being unbelievably supportive and LOUD! While particularly true in the larger towns and cities along the course, and especially so at Wellesley College, I never felt unsupported along the entire course. The volunteers - of which there were literally tens of thousands - did an absolutely first-rate job, and bring huge credit to the most prestigious of marathons. I highly recommend the Boston Marathon to all serious runners! 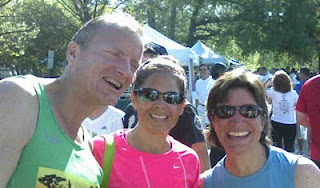 Following the Memorial Park Conservancy's "4 the Park" Fun Run fellow Texas Independence Relay DOGs Laura, Kim and I enjoy some healthy food and beverages. We had ample cause for celebration as each of us placed within our respective age groups in the 4-mile race event - despite very hot conditions (~70°F with 80% humidity). 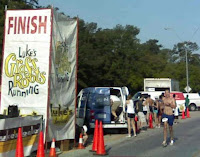 
Post-race thoughts.  I was extremely happy upon crossing the finish line to realize that despite the heat I'd set a ~1-minute personal record.  Additionally, in extrapolating both today's race result and the recent Rodeo Run 10K using Dr. Jack Daniel's methodology suggests that my Boston goal of 3:15 is realistic.

The bottom-line, however, is the Memorial Park Conservancy's 4-mile fun run was a great event (see overall results); it was fun for the participants, and an excellent money-raiser for a very good cause.  I highly recommend this race!