This is a partial follow-up to my recent Hot Weather Running Tips post:

As a Houston runner who trains year round I have been looking for a better hydration solution than the constrictive FuelBelt, or hand-held water bottles which hinder the natural running motion. I then tried Simple Hydration's water bottle after seeing its positive reviews on Amazon, and am glad I did as I love it!

Its unique feature is that it rests on your running short's rear waistband, and nestles between it and the small of your back, thereby requiring no supplemental belt and leaving your hands fully free. As its 14 Oz. total weight is near the body's center of gravity it is barely perceivable, feels comfortable, and you can rest easy as it is BPA free and is top shelf dishwasher safe.

In summer months I like to freeze my water bottle before my runs. With the Simple Hydration bottle it nicely cools the small of my back while gradually thawing its contents, providing a wonderful cold drink of water which lasts me perfectly on my typical mid-week six mile training runs. If similarly used with ice versus water I recommend: 1) Not filling the bottle fully with water before inserting into the freezer the night before to accommodate the expansion of ice and prevent possible damage to the bottle; 2) Placing a thin sock around the bottle to protect the skin while providing insulation to keep the water cool longer.
Posted by Mark U. No comments: 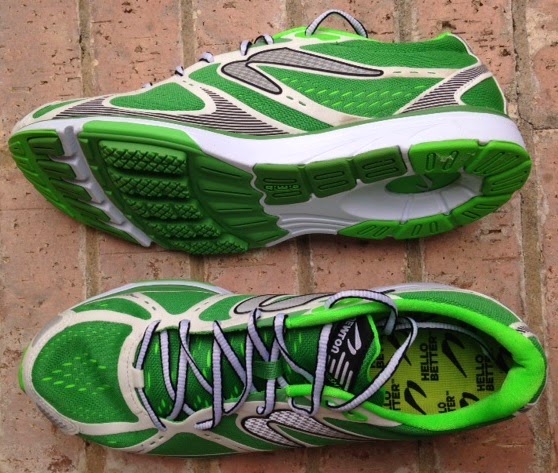 Over the past three weeks I've run extensively in Newton's latest Kismet stability running shoe. This includes over thirteen mile training runs on Houston's hard concrete roads, and five six mile runs on the hard steel surface of a cruise ship. As a long-time fan of Newton shoes I really like these too!

One oft-heard comment with first time Newton runners is the favorable impact on their running speed, attributed to the Action-Reaction technology lugs incorporated into the sole, roughly under the metatarsals. In prior Newton shoes the presence of these lugs were typically immediately apparent while walking, as the walker notices to a greater extent the lugs' height.  However, Newton's Kismet shoes incorporate tapered lugs, so the shoe is more comfortable while walking and is therefore more versatile and comfortable.

My intuition about the effect of Newton's tapered versus standard lugs is that a bit less energy recovery results, and this may result in a slightly slower running speed.  This impression is reinforced from Newton's own marketing material which uniquely includes the word "fast" in reference to the POP 1 design of the Motion and Gravity, and not the POP 2 design of the new Kismet or Fate.  However, any running speed reduction of the Kismet versus the Motion, if present, is insignificant.

As a major advantage for first time Newton buyers the low $129 MSRP of the Kismet will hopefully encourage more runners to give them a try.
Posted by Mark U. 1 comment:

I have been asked to participate in a forthcoming Runners Round Table podcast on hot weather running, and feel myself to be well prepared owing to having run for over fourteen years in hot and humid Houston. With the caveat that I am not a physician, and am simply sharing my personal experiences, the following are my related thoughts.

Heat acclamation helps, but it is no panacea:

The heat-acclimated runner quickly produces large volumes of sweat upon the initiation of exertion in hot conditions. This quick and voluminous sweat response results from the body's prior training in similar conditions, and the resulting trained response provides essential cooling through the typically highly efficient heat transfer mechanism called evaporation. However, under high humidity the effectiveness of evaporation is severely diminished, and as such the runner quickly becomes at risk of overheating due to their rising core temperature.

Repeated stimulation and use the sweat glands allows them to become much more effective at minimizing the losses of critical and life-sustaining sodium and potassium electrolytes. Though a heat acclimated runner's sweat is therefore less salty than a non heat-trained runner's, a dangerous low blood salt condition called hyponatramia is a serious risk for all runners. This risk is heightened amongst relatively new marathoners who are often unwisely instructed to "drink even if you're not thirsty and at every aid station" so dilute their body's electrolytes by excessive fluid consumption, compounded by inadequate heat acclimation resulting in greater electrolyte losses through their sweat.

Personally, while running in hot and humid conditions over ten miles in length I supplement my body's electrolyte stores by taking Succeed S!Cap (a buffered sodium and potassium capsule) approximately every 30 minutes. As it is important to take the capsule with fluids I align the supplement's timing based on Gatoraid or water availability. Conversely, for shorter mid-week runs I drink only water and do not take any electrolyte supplements, though do incorporate additional salt into my diet based on taste.

Humidity is the silent killer:

While for most Americans the absolute temperature is the primary determinant of whether the outside conditions are perceived as hot, for experienced hot weather runners they look first at dew-point. Why?

As noted previously the reason is that our bodies reject heat primarily through sweating. An interesting fact is that human beings have more sweat glands then any other mammal, and it is generally believed that this physiological attribute provided our distant ancestors a survival advantage. Again, when the dew point is high, the resulting high humidity renders sweating as a cooling mechanism largely ineffectual.

I think point #3 is the most important to know your sweat rate.  I understand that every pint of sweat typically has 500 mgs of sodium therefore after loosing a few pints of sweat the sodium replacement becomes critical.  While an experienced runner may be secreting less sodium, as a rule of thumb I try for one Succeed S!Cap (330 mgs of sodium) per pint of water.

Another suggestion is for longer runs if you carry a water bottle with an electrolyte drink (gatorade), spiking the fluid with a 1/4 teaspoon of sodium is a good way to get sodium in the body early and easily.  There has very little impact to the flavor of the gatorade by adding a little sodium.  I usually use a 1/4 teaspoon for a 20 oz bottle, so if the fuel belt is used then perhaps an 1/8  would be better.  By getting the sodium in the body early on a long run defers any sodium deficient problems.

This affects people the most who perspire heavily.  Signs are those whose clothes are soaked before others, shoes get soggy wet and those who cramp.  Dizziness and cramps are signs of dehydration and when attempting to re-hydrate either on the run or after the run, sodium is a must either in pill form or food.  Salty but tasty foods - tomatoe based foods like pizza, red pasta sauce, salsa, store or restaurant made soups.  Potato chips are salty but not really healthy.

Additional good input from a physician and friend:

The body functions best within a certain temp range 98.6+\- 1.4. As body temp rises the risk of organ failure increases. The body keeps cool primarily by evaporation conduction convection and radiation. When you exercise in hot temps the latter 3 are out and when it's too humid there's no vaporization gradient for sweat to evaporate so that becomes less effective. If you're "conditioned" you can tolerate the effects better but invariably you too will succumb to the heat. The risk is much higher in the first couple of weeks of training in the heat and any acclimatization is gone after only a few weeks of being back in a temperate environment. As you note running at dawn when humidity is less as is temp is safest. There's a reason why marathons are run mostly in 60-70 degree weather.