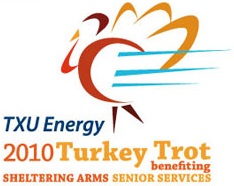 With dread that I saw the weather forecast for the 2010 10K Turkey Trot held this morning, a sizzling 74°F combined with high 85% humidity and 10 MPH southerly winds. As a very poor hot weather runner, and my thoughts on a very funny and apt Hyperbole and a Half sent by my wonderful daughter I had only one unhappy thought - aargh!

Nevertheless, it was great to socialize at the event with several good friends and to support the entirely deserving Sheltering Arms agency. Upon starting the race at an improved location versus prior years I was happy to lead-off the first two miles relatively well. However, despite pouring water over my head in a vain attempt to cool-down at each aid station I was forced both by the heat and the congestion caused by the merging 5K runners to tremendously slow down in the second half. Nevertheless, I had a lot of fun, and was happily surprised to see that I'd finished in 7th place in my age group with a time of 46:57 (5-minutes off my February P.R.)

It's important for me to more profoundly reflect - especially during this time of Thanksgiving  - upon all of the blessings that my family and I have been consistently provided, included in which is the joy, serenity and friendships provided by running. So, during this holiday I wish you and your families the very best!

The weather gods would have had to work even harder to make conditions for the 2010 San Antonio Marathon any better. It was cloudy with moderate winds and the temperature was in the 50s.

As this was my first San Antonio and Rock & Roll Marathon I deliberately didn't run with my normal iPod so-as to better appreciate the music and interact with spectators and fellow runners. This worked out quite well, and the groups along the course were quite good - especially a blues band playing at the half-way point.

The San Antonio Marathon logistics were excellent, far better than the numerous MarathonGuide.com complaints from runners whose primary gripe was the former starting location requiring frequently delayed busing (now solved with the new downtown start). The course continues to include great scenery including the Alamo, though I was a bit disappointed with sparse spectator support for many late marathon miles owing to the remote municipal airport routing. My worries of elevation changes along the San Antonio course proved to not be a non-issue, though they were larger than Houston's pancake flat terrain and comparable to Dallas White Rock's (and nowhere close to the very technical and challenging Austin course).

As to my performance... well, I was very disappointed. But, I learned some good lessons through the experience.

I felt good on the morning of the race, albeit with some lingering sniffles from a nasty cold that I was nearly over. As such, I decided to line-up with the 3:15 pacing group hoping they'd guide me to a 4-minute P.R.. The pace group leader Derek was very good, and he held the group to generally consistent 7:20 splits, which I was able to hold onto without a problem until the 16th mile when the 'wheels fell of the wagon'.

At that point, quite unexpectedly and very suddenly I bonked very hard. Within a quarter mile I suddenly felt very hot and began to feel a bit lightheaded - as I had in the Chicago Marathon five weeks previously when I'd similarly bonked shortly after the 20th mile marker. I immediately slowed down hoping that I'd get my Mojo back, as I had somewhat demonstrated in Chicago's late stage while approaching the Grant Park finish. However, no dice; my proverbial goose was cooked.

In my emotional let-down in the remaining 10 mile walk to the finish line watching stronger and better paced marathoners quickly pass I briefly thought of calling it quits and DNF'ing my first race by jumping into the sag wagon. I didn't and was glad. I really wanted the medal, and am now glad to have it! While I hope I'd not hesitate to DNF should medical issues necessitate, I knew my problem was ultimately simple glycogen depletion caused by poor preparation and bad race execution.

During my long walk, where I was only briefly able to jog slowly for brief quarter-mile segments, I was glad that I didn't have my iPod since it forced me to interact with the incredibly supportive San Antonio spectators. I also talked extensively with numerous other runners whose bad fortunes matched mine, and was encouraged to find many first time marathoners who were enjoying their inaugural runs. While walking-in to a discouraging 4:32 finish, I genuinely enjoyed the race, though immediately began plotting how to avoid a similar fate.

In retrospect I believe that my undoing was several-fold:
So, as the bottom line on this day after the marathon, though facing worse-than-normal body and muscle aches I'm truly very glad that I ran the San Antonio Marathon and highly recommend the course (comparing Texas Marathons I'd still list Houston's as the very best, followed by San Antonio, Dallas White Rock then Austin.) I learned, and re-learned, some lessons along the way and I hope to be ready for Houston - now only 11-weeks away.


Finally, here's a great article by Matt Fitzgerald on the inherent challenge to appropriately pace a marathon, even for very experienced marathoners.

Post Script: After the race was completed I discovered that several hundred runners who began the race a few minutes behind me were held-up by an unscheduled train by as much as three to four minutes. I was contacted by the race organizers afterward asking me whether I was held-up by the train, and if so by what length of time. Naturally, I responded that I wasn't held-up at all, so was very surprised earlier this week when I was informed that my finishing time was adjusted by subtracting four seconds (evidently a mathematical calculation was made for all runners using their potentially train-interrupted first 5K split versus their 5K to 10K split.) While this approach is probably the most defensible methodology it obviously over-estimates  runners' train-induced delay for those individuals like myself who in fact were not delayed (as most individuals in Corrals 1-3 were not), and for those individuals who attempted to make-up for lost time and therefore ran significantly faster afterward. Given the alternatives of denying individuals a hard-fought P.R. or B.Q. by under-estimating the train delay I guess the organizers have made the right decision - but the whole thing just rubs me the wrong way, and I sure hope trains are stopped in the future!
Posted by Mark U. 9 comments: 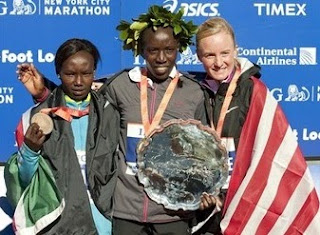 First, the latest creative work from my friend Colin Hayes (http://resurrectedrunner.blogspot.com) is too funny to not re-post:


Then, I ran into this gem:


On the serious side, I wish the very best of luck to everyone running the New York Marathon on Sunday. With that great race in mind here's a good LetsRun.com link to two great N.Y. Marathon related video series.
Posted by Mark U. No comments: