This morning I ran the Austin Marathon, and while I found the hills HUGELY challenging versus the much easier Austin course that I'd run five years ago I neverthless narrowly managed to eke out a personal record by one-second!

When I'd last run Austin five years ago the course was both faster and easier since it started twenty-miles north of the city and finished downtown, providing a gentle downhill for much of the course and an overall net elevation decline of more than 400 feet.  Unfortunately, the growing logistical challenges of busing race participants, and dealing with the frustration caused by traffic jams on the surrounding narrow roads in the north Austin area caused race organizers to adopt the current course - which is a technically challenging looped course through most of Austin's many hills (see link).  Nevertheless, though challenging the course was both interesting and achievable. 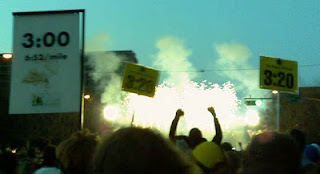 The race began with a pyrotechnics display directly over the start line.  In downtown Austin's pre-dawn darkness the pyrotechnics were spectacular, however due to the lack of wind the resulting fumes lingered in the starting area - which we were unfortunately forced to breathe as we started our run. 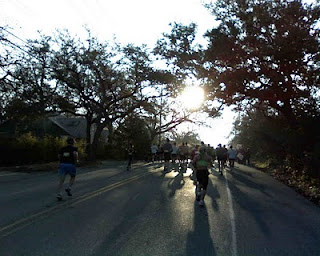 Quickly getting past the starting line the weather conditions were good, as fortunately a predicted cold front with accompanying strong winds and rain held-off until just after the marathon finished.  The sky was crystal clear, and as a result the temperature quickly rose from the initial mid 30s to the mid 50s - though perceptually warmer still owing to the high humidity.
As with other recent successful recent marathons I made the decision to run with a pacing group, on today's occasion the 3:20 group since I was hoping to beat my prior personal record of 3:19:38 set on Houston's flat course one-month ago.  The two Austin 3:20 pace group leaders did a fantastic job of keeping the group organized, motivated and encouraged.  They demonstrated incredible running discipline and strength by holding an extremely consistent pace - whether running up or down hills.  As I didn't possess the strength to easily match their pace on the steepest up-hills I ran behind the group at those points (though always keeping the group in sight), then caught them on the ensuing downhill.  Even more-so than in prior marathons the pacing group was pivotal in allowing me to set my narrow personal record.  Thanks again, pacers!!