Earlier this morning I enjoyed running M.D. Anderson's 13th Annual "Sprint for Life" 5K. Though a very experienced runner with numerous marathons, half-marathons and 10Ks under my belt, I'd never before run an officially timed 5K race. Consequently, a P.R. was assured!

In fact, I was somewhat concerned since I was hoping to run faster than my recent 4-mile P.R. pace of 6:40 minutes per mile - however the weather was decidedly uncooperative with a starting temperature of 75°F, clear skies and 90% humidity. Fortunately, I had an opportunity to warm-up beforehand with a fellow KenyanWay runner and to chat with a few friends - which appropriately re-focused me to simply have a good time. 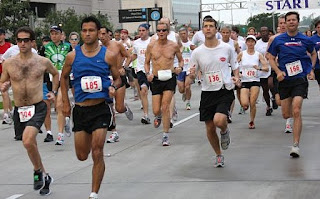 Starting about ten runners from the lead I held my position. However, owing to the heat and my poor pacing I was unable to negative split as I had intended. My first mile split was 6:24, followed by 6:33, 6:44, following which I finished the final 0.11 miles at a 6:30 pace.  My overall 20:19 time was second in my age group and 11th place overall.

Afterward, I visited KenyanWay Sean Wade's excellent MyRunningTimes.com site, which computes WMA age-graded rankings for races and individuals.  Age-grading has the effect of adjusting runners' performances as if each individual were at their youthful peak (a fascinating concept by itself!) Unfortunately official race results aren't determined on this basis, as I would have been in 4th overall place!

Summing up, I rate the "Sprint for Life" 5K as an excellent Houston-area race. It is very well organized, fun, provides plenty of support on and off the course to runners & walkers - and most importantly all funds raised goes towards the excellent cause of supporting ovarian cancer research at M.D. Anderson.