I tapped my running watch as I quickly crossed the half-way marker of the 2010 Chicago Marathon, happily noticing my half-marathon split of 1:35:14. This was right where I'd hoped it would be, and I was impressed that had the race just ended I would have easily set a new half-marathon personal record. However, my confidence was fading with the sweat pouring down my back and I was beginning to question my judgement in joining the team. 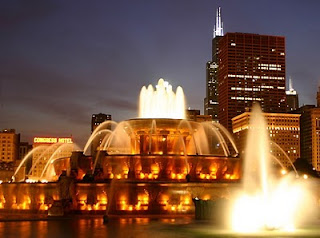 The day had started well. After my wonderful wife dropped me off at Grant Park I had ample time to prepare. Standing next to the beautiful Buckingham Fountain I contemplated the great city and reflected favorably on my prior four Chicago Marathons. I was happy that I'd avoided last year's nearly calamitous late arrival to my assigned starting corral, so had ample time to meet the 3:10 pacing team leaders and the other runners who shared my goal. I felt comfortable with the team since the leaders were extremely experienced and as its members were generally runners like myself - Boston qualified marathoners with comparable prior finishing times.

With growing excitement and the sound of the starting gun ringing in our ears we excitedly began our race. After two miles of the expected weaving around erratic and suddenly slowing runners I felt comfortable with the team as it assumed its 7:15 pace. My breathing was in control in the morning air, and I successfully repeated my mantra to relax. However, beginning at the second fluid aid station I noticed the pacing leaders dramatically speeding-up afterward for a mile which was both annoying and somewhat worrisome. Ultimately I accepted their approach comforted that if I remained with them through the half that I could then drop away and self-manage a 7:35 pace through my hopeful P.R. finish. 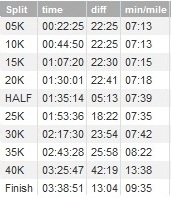 Despite my doubts upon crossing the half I successfully followed exactly that strategy until just after the twentieth mile. At that point the strong sun and climbing temperatures - ultimately reaching a brutal 80°F - exacted their harsh toll. I was astounded to see just how quickly my apparently inadequate consumption of fluids and electrolytes caused me muscle cramps, a headache, lightheadedness and general weakness - which in combination forced me to a walk.

In retrospect it was fortunate that I yielded to these symptoms. During the subsequent miles walking through the remaining aid stations and slowly jogging between them I drank amply and took some extra Succeed Electrolyte Caps to restore my fluids and electrolyte deficit, and began feeling much better. Upon seeing the 3:30 pacing team pass I sped up in the final mile and ran through the finish line to the loud shouts from the crowd of tens of thousands. Though disappointed with my 3:38 time I was happy to finish healthy and to learn many lessons:
Nevertheless, despite the weather induced mis-judgement I had an absolutely great experience, and highly recommend the Chicago Marathon!