This morning I had the fantastic experience of running the 2009 Chicago Marathon. The results were beyond my wildest expectations since I completed the marathon in 3:25:32, which improves by over seven-minutes my personal record and re-qualifies me for the Boston Marathon! I was especially delighted since up until only six-weeks ago I was unable to run for a month while recovering from a minor stress-fracture.
I was very familiar with the Chicago course, as it was my 4th (and 14th overall marathon distance or beyond). The race temperature was absolutely perfect: 34 to 41°F, minimal humidity with a moderate 5-8 MPH wind from the north. While it was admittedly very cold during the pre-race waiting period, through wearing a disposable sweatshirt, hat and gloves (which I tossed at the start) I was able to remain comfortable. 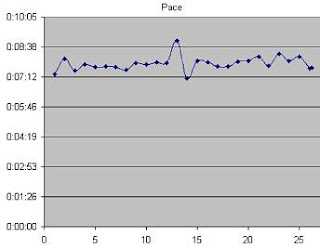 I was very happy with my pacing consistency, as is shown on this chart. My first half-marathon time was 1:43:08 (7:52 pace), and I managed a rare negative-split in the second half with 1:42:24 (7:49 pace). Proving especially helpful was running the first 5K with the 3:30 pacing group as this mitigated my unfortunate tendency to jack-rabbit the start. Though I gradually ran ahead of the pacing group after that point, it played a continuing psychological benefit since I knew that if the group were to catch me I would then be able to hang-on with the 3:30's until the finish line. On reflection, during both my recent marathon successes (Houston and Chicago) I benefitted by pacing groups, where-as my recent April Boston Marathon was a partial disappointment (in terms of my completion time - not the fantastic overall experience) due in-part to their absence.

With regards my recent successful stress fracture recovery I credit my coach's excellent recommendation that I pool-run and bicycle during my five-week recovery period. Additionally, I credit myself for having the wisdom to follow my doctor's sage advice to interrupt my marathon training while giving my minor stress fracture time to fully heal. The bottom line lesson-learned was was not to give-up following an injury! Instead, keep-up the hard work and your positive attitude via finding healthful alternative activities to maintain your physical and mental health!