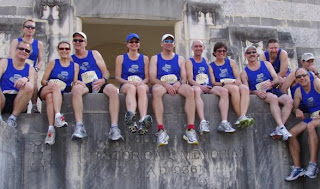 This weekend with 11 friends I had the pleasure of running the 2009 Texas Independence Relay event, which is appropriately described as "The Mother of all Relay Races" as it's 203 miles long and stretches from Gonzales to the San Jacinto Monument southeast of Houston! This event (http://www.texasindependencerelay.com/) drew well more than 150 teams, and was an absolute BLAST!!!
I ran three of my intended four legs for ~16 miles, and really enjoyed the camaraderie of the team throughout the weekend. I felt immense pride as our final runner sprinted to the monument at the end of the second day, and relaxed completely with the team as we celebrated our accomplishment. This event is totally different than running any individual race event I've ever run, since the pride that we felt was directed towards our combined accomplishment. See our uploaded video here.
My only frustration is the slow rate of healing of my Achilles tendinosis, which I discovered to my chagrin continues to haunt me as I neared the end of the first of my five-mile segments. Owing to the subsequent worsening of the condition, and worries about whether I can run the April Boston Marathon scheduled pulled out of my previously assigned fourth five-mile segment, and was very appreciative and gratified that my teammate Dave, back-stopped by Janet, filled in for me.
I'm extremely frustrated knowing that I could have avoided the Achilles problem from developing initially by: 1) NEVER doing speed work on a small (1/8th mile) indoor non-banked track (I should instead simply have simply done the treadmill, which despite its mind-numbing boredom-inducing nature would have been a far better alternative to the frustration I've suffered instead); 2) NOT ignoring the Achilles pain initially, i.e. I should obviously have appropriately rested and begun self-treatment on the first sign of injury, versus largely ignoring the problem .
Oh well, live and learn! Meanwhile, I've found two GREAT links providing excellent treatment guidance for this Achilles condition (which I'm following) at: http://www.mckinley.uiuc.edu/Handouts/achilles_tendinitis/achilles_tendinitis.html and http://achillestendon.com/
Post-run update: The total time for the DOGs 203 mile run was 28:12:55, and average pace of 8:20.9. We finished officially 41st out of 151 finishing teams. This represented a bit of a set-back as the DOGs last year accomplished 27:36:00, a net slow-down of about 36-minutes. My three legs (all of which were affected by my Achilles):

The TIR 2009 overall results can be seen at this link.
Posted by Mark U.