Pacing a portion of the Rocky Raccoon 100 Miler

On Saturday late evening deep in the woods of Huntsville State Park with only my headlamp and a trail map to guide me, I was there to support Tim, a long-time friend and fellow multi-marathoner.  At about 10 PM in his 72nd mile we would meet at the Damnation aid station, and I would then run 11 miles with him in the nationally known Rocky Racoon 100 mile race.

While I had run several much shorter 50K's, this was my closest exposure to an ultra distance endurance race far eclipsing anything I had personally experienced.  I had already run 13 miles earlier that morning with Kenyan Way, so my legs were feeling the effects despite having had half a day's rest to recuperate.  So, it was with massive respect that I witnessed runner after runner gracefully put in mileage with steady legs that made me as an experienced marathoner scratch my head in amazement.

The Rocky Raccoon organizers wisely only permit pacing support in the runners' final 40 miles of their 100 mile race, which works well since by then the 50 mile runners have largely vacated the Park and its trails.  We successfully met at Damnation, and I exchanged pacing duties with Joanne, another long time experienced runner and friend.  Tim and I ran together for the next three hours, talking nearly continuously in our normal way discussing a diverse range of topics. 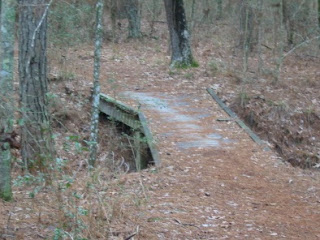 Though Tim was understandably tired (he had been running largely non-stop since 6 AM), he nevertheless showed tremendous strength and running skill.  I was particularly interested in his successful technique of walking all uphills while otherwise running for six minutes followed by a brief one minute walk break.

Having run the beautiful Huntsville State Park during two daylight hour 50K's, I was impressed that the 100-mile runners, in darkness punctuated only by their headlamps' illumination, successfully navigated the myriad pine tree roots which thoroughly carpet the trail.  Each of the hundreds of thousands of tree roots along the trail creates a treacherous challenge and puzzle to be solved in a fraction of a second with each foot plant.  Any momentary lapse of concentration or glance away from the trail provides the runner countless opportunities to trip, twist an ankle, and fall.

Tending amazingly and consistently well to the hungry, tired and occasionally injured runners were many volunteers who staff the aid stations that are provided approximately every three miles in the race's complex circuit.  All the runners that I overheard were openly and appropriately grateful to these volunteers, as only through their efforts could the race occur.

I am proud of Tim that he completed his 100 mile race, narrowly (by less than 30-minutes) missing the achievement of breaking his goal of 24-hours - an amazing accomplishment nevertheless.  I was happy to be a part of the group of four running friends who have known and run with each other for many years, and successfully supported Tim through some rough stretches.  Simply expressing positivity and engaging conversation with a sleep deprived and exhausted runner is often-times all that is needed.
Posted by Mark U.